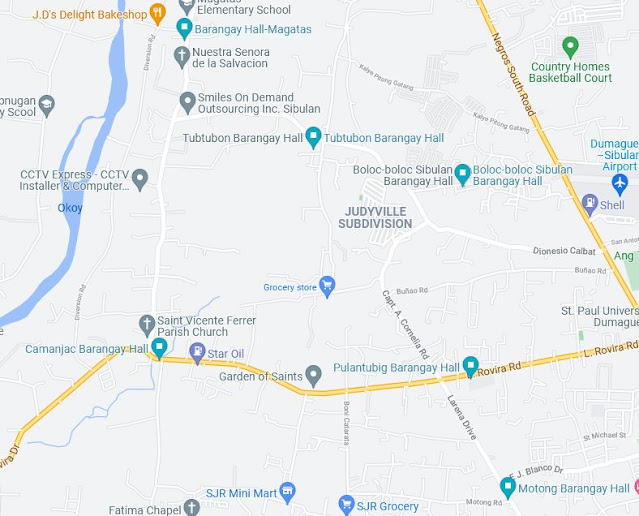 This morning I wanted to indulge in four of my hobbies - bicycling, photography, blogging and posting to Google Maps. With that goal in mind, I decided to ride to six of the barangay halls located within cycling distance from my house. While there, I'd snap a photo.

For those reading this who aren't familiar with some of the ways of Philippines, each city and municipal area is made up of "neighborhood areas" called barangay. For the most part, the barangay will have a barangay hall / health center, although I have been in some barangay so small that a barangay hall is nowhere to be found.
The six barangay hall I rode past today are - 1) Magatas 2) Camanjac 3) Motong 4) Pulantubig 5) Boloc-boloc and 6) Tubtubon. According to Google Maps the distance traveled was 10.5 kilometers.
Magatas
This is my home barangay. Our house is less than 200 meters from the barangay hall and it's impossible to travel from our house without passing the hall. The old brgy. hall has been torn down and a new one is being built. There is a temporary health center just across the road from the hall. 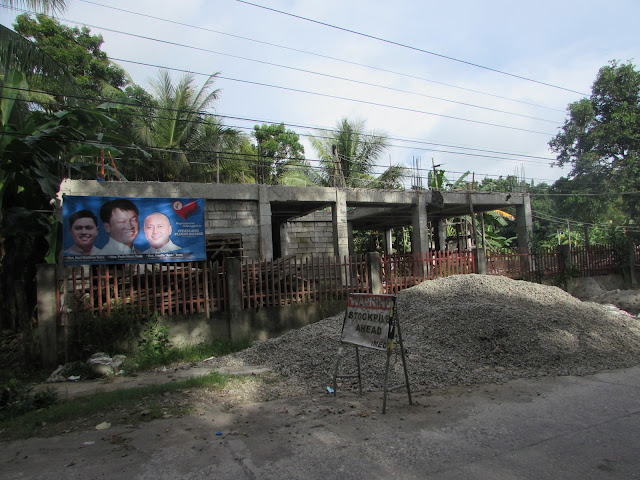 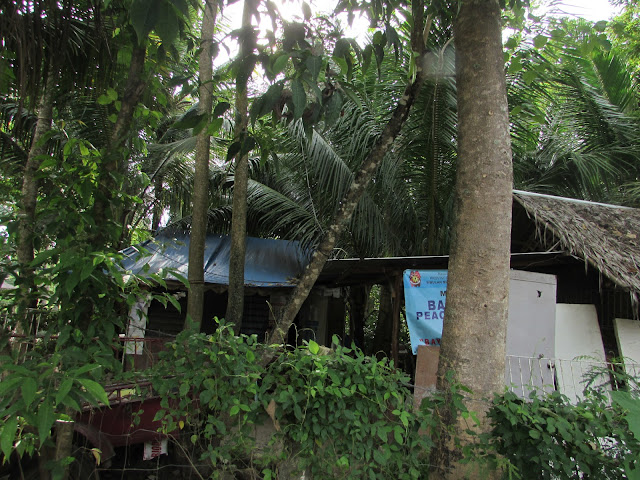 Camanjac
Turning south at the Magatas Brgy. hall, my first destination is Camanjac. It's a 2.1 km ride with a slight upgrade. Of the six Brgy. halls I will visit this morning, three are actually located in Dumaguete - Camanjac, Motong and Pulantubig. 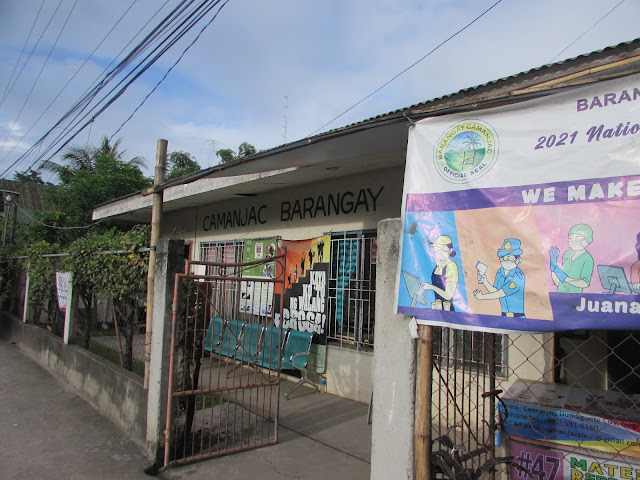 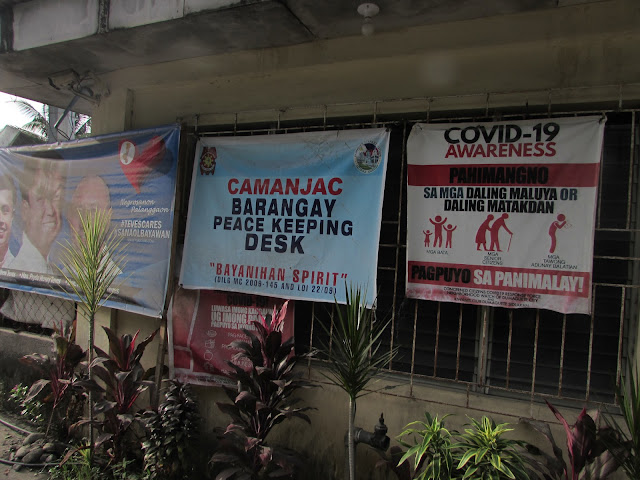 Motong
Heading east at Camanjac, I rode the 2.7 km to Motong. There are two different routes I can take. To me, turning right at Boni Catarata to Motong Rd. seems the most direct route, but according to Google Maps, turning later at Larena Dr. to Motong Rd. is 200 meters shorter. This seems counter intuitive to me so I went the (so called) longer route via Boni Catarata. 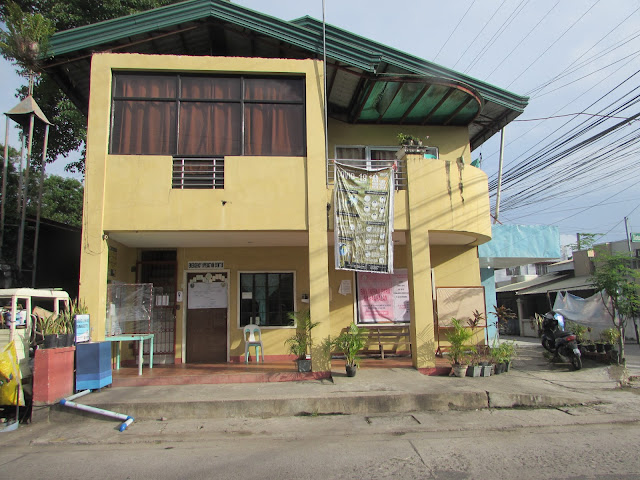 Pulantubig
This Brgy. hall is located about 1 kilometer from the hall in Motong.
The name Pulantubig translates to "red water". According to one source, there is a large red rock within the barangay, with water running over it; the rock making the water turn red. Where exactly this is located is unknown to me. 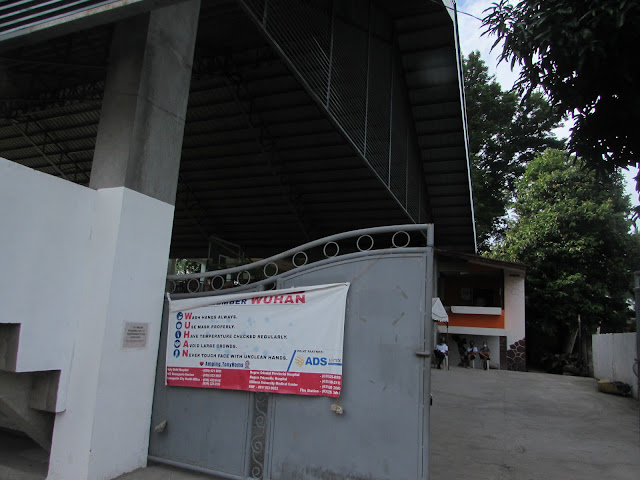 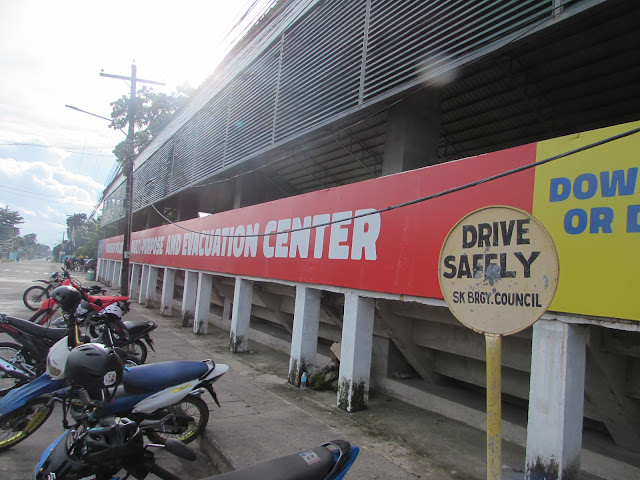 Boloc-boloc
Arriving at this barangay hall, I'm back in Sibulan. A distance of 2.2 km from Pulantubig. 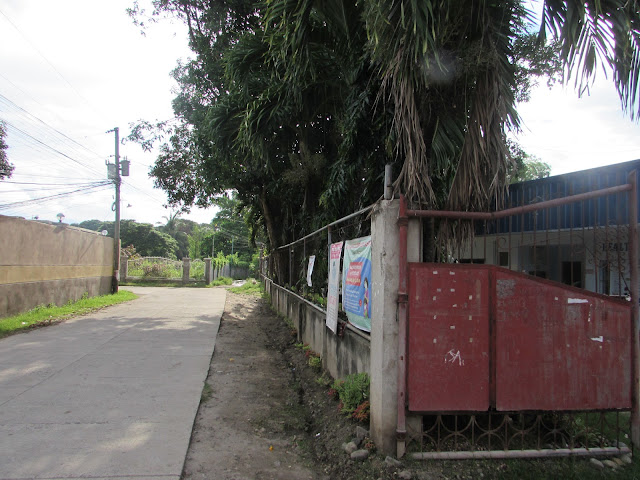 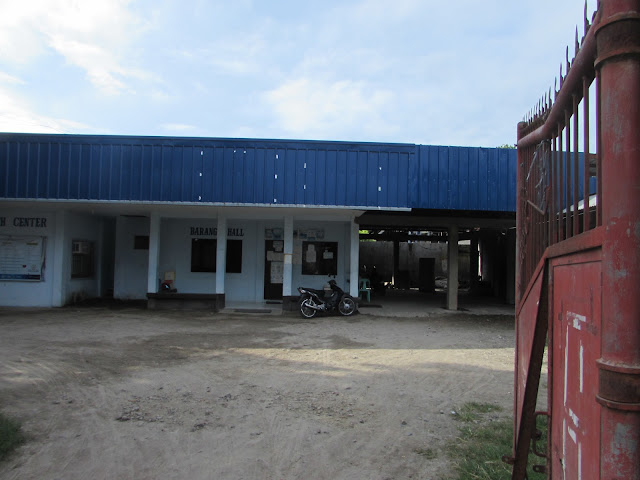 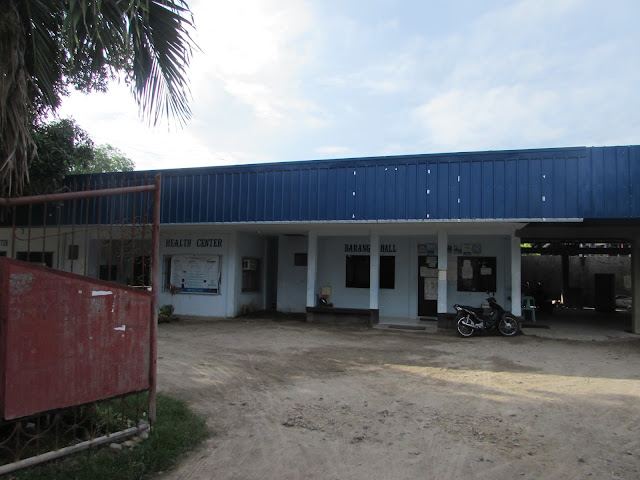 Tubtubon
From Boloc-boloc, the ride is 1 km to the Tubtubon Brgy. hall. After Magatas Brgy. hall, this is the Brgy. hall I most frequently pass while bike riding. From here, I'll ride 1.6 km to my house in Magatas.The ride this morning was quite enjoyable. I can see making this a regular run. 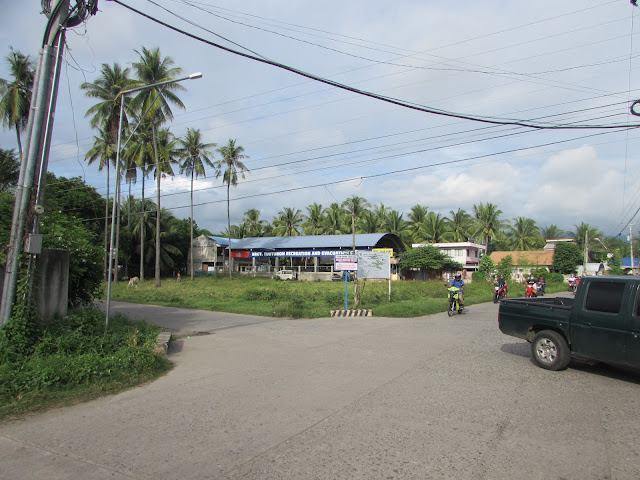 Posted by Robert Simms at 10:07 AM No comments: 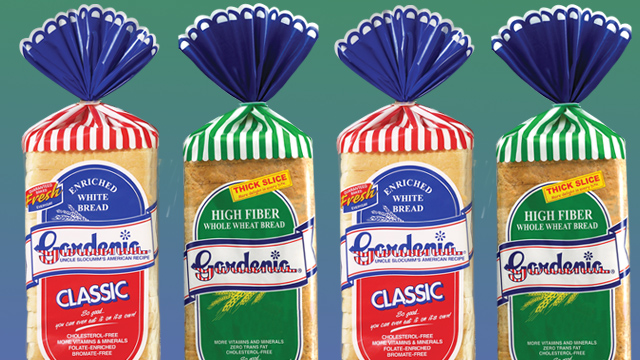 I'm sure the situation is different in Manila or Cebu, but finding good quality sliced bread isn't always easy in our neck of the woods. Of course, finding good whole wheat bread is even more difficult than locating sliced white bread. Our family is partial to whole wheat, and we've found the Gardenia brand to be just what we want. It's reasonably easy to locate the bread in Dumaguete, but here in Sibulan, the only store that sells the Gardenia Whole Wheat is Mercury Drug.

Fortunately, the Mercury Drug is within bike riding distance for me. I'd ridden to the drug store in the past to purchase my blood pressure meds. and to the Gentle Paws pet shop next to the drug store for the occasional dog food run. 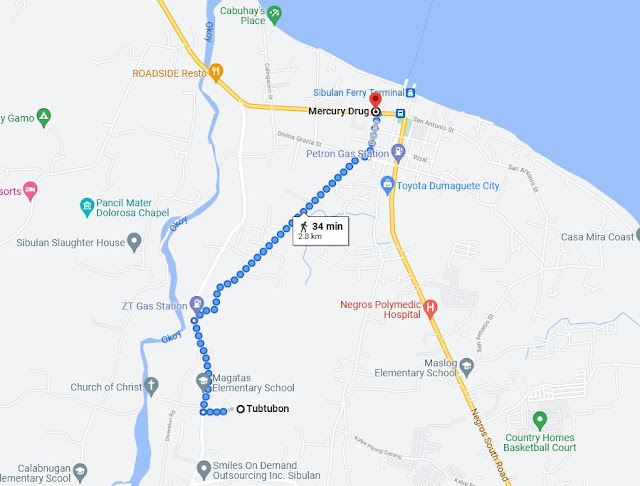 I decided to head that way this morning for a loaf. The most direct route is 2.8 kilometers (one way). I wanted to do a bit more riding this morning, so I planned to travel back thru Tubtubon - that route is 4.4 kilometers. 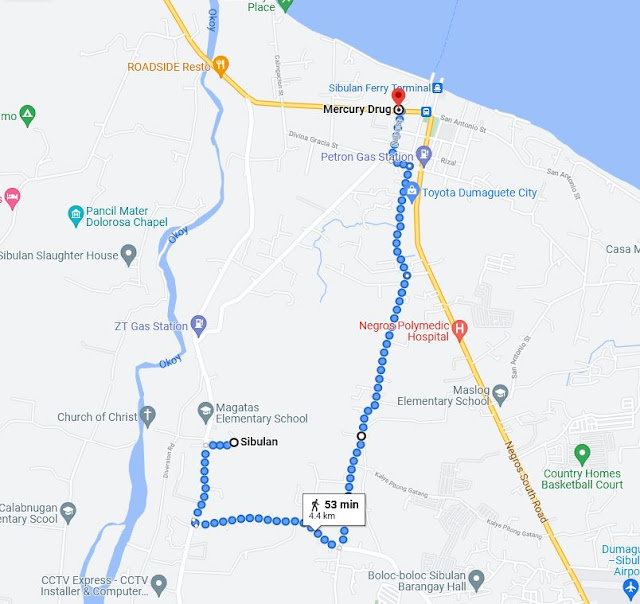 The whole trip would be 7.2 K - more in line with my usual morning run.

Unfortunately, Mercury Drug had no whole wheat bread in stock this morning. Not to waste the trip, I bought a loaf of the Gardenia sliced white bread; good, but not my first choice.
Posted by Robert Simms at 9:01 AM No comments: 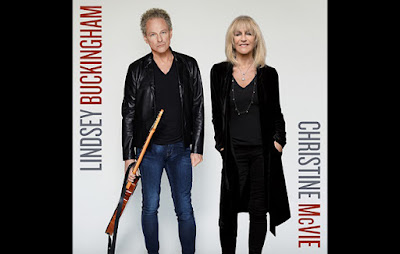 It's been ages since I thought about Lindsey Buckingham, Stevie Nicks, or anybody else associated with Fleetwood Mac. The only reason they've come to mind today is because of a lede on Drudge Report where it was reported that Buckingham had compared Nicks and his other former band members to the Republicans and Donald Trump. That was just the sort of click bait that would get my attention.

It was in the linked to article from RollingStone that I learned that Buckingham had released an album with Christine McVie in 2017. Of course, I opened Spotify to search for the recording.

The album contains 10 songs, but from listening to it one would think you were listening to 10 slightly different versions of the same song. Fleetwood Mac's music could be repetitive but this album takes repetition to stellar levels. It isn't that the songs are , horrible it's just that there is nothing new with this music. Boring is worse than horrible.
Posted by Robert Simms at 8:18 AM No comments:

Email ThisBlogThis!Share to TwitterShare to FacebookShare to Pinterest
Labels: Music

CNN and Biden in Panic Over Texas Abortion Law 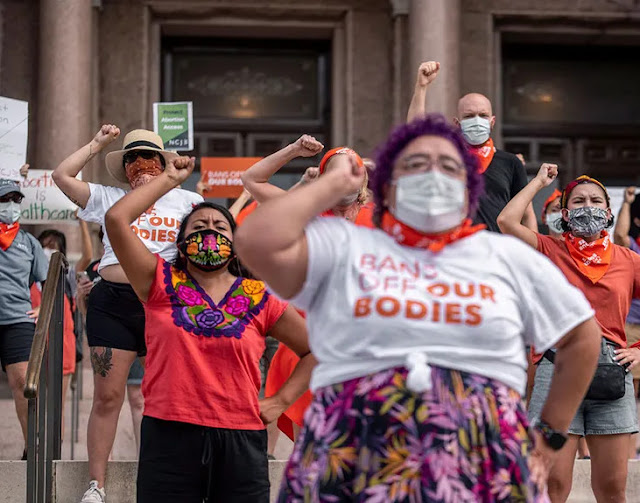 Joe Biden and CNN in panic mode over the Supreme Court's 5-4 vote leaving a Texas abortion ban in place.

John Roberts has lost control of the Supreme Court
Biden launches federal effort to respond to Texas law as he faces pressure to protect abortion
Congress could protect access to abortion. Here's why that's unlikely to happen.

Posted by Robert Simms at 8:54 AM No comments: 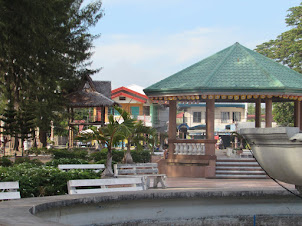 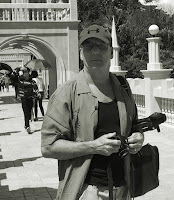